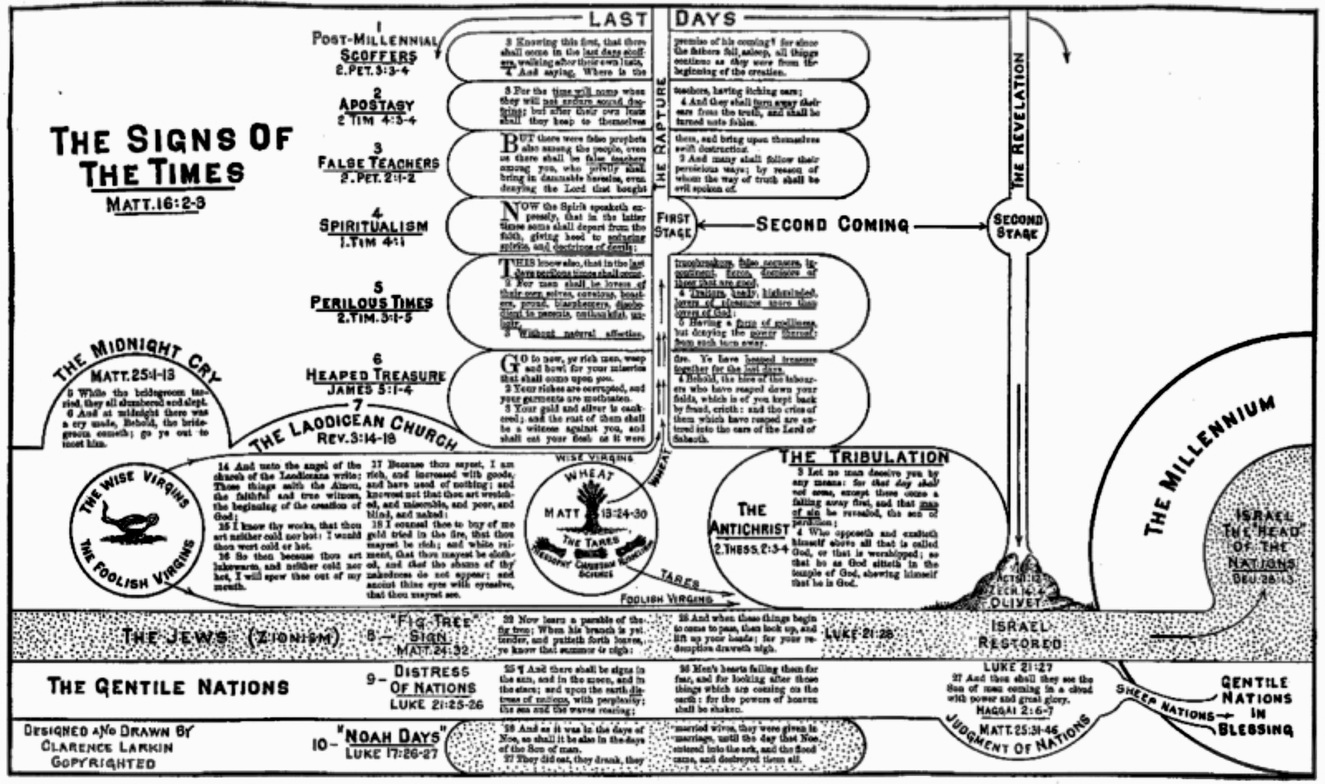 While we cannot name the exact date of the Lord's Return its nearness may be known by the character of the Times. As to this the New Testament gives no uncertain sound. In Dan 12:4, Dan 12:9-10, we read, "But thou, 0 Daniel, shut up the words, and seal the Book, even to the 'TIME OF THE END': many shall run to and fro, and knowledge shall be increased. . . . Go thy way, Daniel: for the words are closed up and sealed till the 'TIME OF THE END.' Many shall be purified, and made white, and tried; but the wicked shall do wickedly; and none of the wicked shall understand; but the WISE SHALL UNDERSTAND." These words declare that the prophecies of Daniel were to be "shut up" and "sealed" until the "TIME OF THE END." This expression does not mean the "end of Time, " but is the angelic messenger's way of referring to the "Last Days" of the "Times of the Gentiles." At which time he declares that the Book will be "unsealed, " and "knowledge shall be increased." What is here meant is "prophetic knowledge" of the things recorded in the Book of Daniel and other prophetic writings of the Scriptures. This is made clear by the statement that only the "wise" shall understand. That is, those who are enlightened by the Holy Spirit, and not those who merely have intellectual knowledge, for the wicked SHALL NOT UNDERSTAND. How wonderfully this is true of these days. The Higher Critics have labored hard to discredit the Book of Daniel, but without avail, for the Book is more studied than ever, and is being "unsealed" by Holy Spirit enlightened students of the Word of God, who clearly see that we have reached the "Time of the End, " and are living in the closing days of the "Times of the Gentiles."

The "unsealing" began about 100 years ago, when the "Midnight Cry, " "Behold, the Bridegroom Cometh, " was heard in the "Revival of Premillennial Truth." For centuries while the Bridegroom tarried the Wise and Foolish virgins "ALL slumbered and slept, " and the Church lapsed into a condition of spiritual apathy, and "The Blessed Hope" was eclipsed. But now all over the world the Blessed Hope has emerged from the shadow, and the virgins are "trimming their lamps" preparatory to going out to meet their Lord, but only the "wise" have oil in their vessels and in their lamps. We are now living in the "Fourth Watch of the Night, " soon the "MORNING STAR" (Christ. Rev 22:16) will appear and we shall be caught out at the Rapture to meet Him and go into the Marriage Feast.

Let us take a hasty glance at the "Signs of the Times." A careful study of the Chart will reveal "Ten Signs."

The Signs Of The Times

1. POST-MILLENNIAL SCOFFERS. In 2Pe 3:3-4 we read: "That there shall come in the 'Last Days' SCOFFERS, walking after their own lusts, and saying, Where is the promise of HIS COMING? for since the fathers fell asleep, all things continue as they were from the beginning of the creation." How true this is of the present day. The Doctrine of the Second Coming is "scoffed" at, and those who hold it are looked upon as deluded fanatics, and sad to say, this opposition comes from prominent religious leaders of the Day.

2. APOSTASY. In 2Th 2:3, we are told that "THAT DAY (the Day of the Lord) shall not come, except there come a 'FALLING AWAY' first." This "Falling Away" is evidenced on every hand.

3. FALSE TEACHERS. In 2Pe 2:1-2 we are warned against "False Teachers" who shall privately bring in "damnable heresies, " even denying the Lord that bought them, such as Christian Scientists and Russelites, and that many shall follow their "pernicious ways, " and sad to relate these "followers" are recruited from the orthodox church members, of whom the Apostle Paul wrote to Timothy (2Ti 4:3-4), saying: "The time will come when they will not endure sound doctrine; but after their own lusts shall they heap to themselves teachers, having itching ears: and they shall turn away their ears from the truth, and shall be turned unto FABLES." This "turning away" is evidenced on every hand. There is a "turning away" in doctrinal standards, in the demand for a regenerated church membership, in church and Sunday school attendance, and in Sabbath observance. Many churchgoers will not endure "sound doctrine." They will not go to hear those who preach the "total depravity" of man, the necessity of the "New Birth, " and the conscious and endless torment of those who reject Christ as a personal Saviour. They demand teachers who will "itch" (tickle) their ears with pleasing, novel and sensational doctrines.

4. SPIRITUALISM. In 1Ti 4:1 we are warned of a departure from the faith. That in the "Latter Times" (the Last Days of this Dispensation), some shall "depart from the faith, giving heed to seducing spirits and doctrines of devils." This is being fulfilled in the increasing number of those who are forsaking their Christian belief to become followers of Spiritualistic Mediums and to dabble in Psychical Research.

5. PERILOUS TIMES. Of these times Paul told Timothy. "This know also, that in the 'LAST DAYS' Perilous Times shall come. For men shall be lovers of their own selves, covetous, boasters, proud, blasphemers, disobedient to parents, unthankful, unholy, without natural affection (for their own offspring), truce breakers, false accusers, incontinent, fierce, despisers of those who are good, traitors, heady, highminded, lovers of pleasures more than lovers of God; having a FORM of godliness, but denying the POWER thereof." 2Ti 3:1-5. We have neither time nor space to enlarge upon the above, but what a catalogue we have here of the "perilous conditions" of the times in which we live.

6. HEAPED UP TREASURE. In Jam 5:1-6, we are told that in the "LAST DAYS" there shall be a class of "rich men, " who shall have "HEAPED treasure together, " and that by "FRAUD, " and who shall use their ill-gotten gain in the pursuit of "pleasure" and "wantonness, " and that God will hear the cry of those who have been cheated of their just share of the profits, and will send a sore judgment upon the guilty. What a description we have here of the unprincipled, speculative and profiteering spirit of the days in which we live, when men become millionaires, and multi-millionaires, in a few years. Truly we are living, in the "Last Days" of this Dispensation.

7. A LAODICEAN CHURCH. In the Message to the Church of Laodicea (Rev 3:14-22) we have a description of the last stage of the professing Church on earth, It is described as neither "hot" nor "cold, " but nauseatingly lukewarm, so that Christ says He will "spue it out of His mouth." It boastingly will claim to be "rich" and "increased with goods, " and to have "need of nothing, " not even of Christ, for He will be excluded and will have to knock for admittance, and it will be ignorant of its true condition, that it is wretched, and miserable, and poor, and blind. and naked. Unspeakably sad it is that this is the condition to a large extent of the professing Church of today.

8. THE FIG-TREE SIGN. When Jesus' Disciples asked Him, after He had foretold the destruction of the Temple: "Tell us, when shall these things be? and what shall be the SIGN of THY COMING, and of the end of the world (Age)? " (Mat 24:1-3), Jesus gave as a "Sign" of His Coming the "Fig-Tree Sign." The "Fig-Tree" symbolizes the nation of Israel, and its "budding" the revival of Israel as a nation. Here again we have evidence of the nearness of the Lord's Return for the revival of Zionism, and the passing of the Land of Palestine into the hands of a Christian nation, opens the way for the restoration of the Jews to their own land, and the fulfillment of the Fig-Tree Sign. The fact that the City of Jerusalem surrendered without the firing of a shot is significant. Jesus said that Jerusalem was to be trodden down of the Gentiles until "The Times of the Gentiles" should be fulfilled (Luk 21:24), and the taking of Jerusalem at this time may signify that "The Times of the Gentiles" is drawing to a close.

9. THE DISTRESS OF NATIONS. In Luk 21:24-27 Jesus tells us that as the "Times of the Gentiles"come to a close, "there shall be signs in the sun, and in the moon, and in the stars; and upon the earth DISTRESS OF NATIONS, with perplexity; the sea and the waves (the peoples of the earth) roaring; men's hearts failing them for fear, and for looking after those things which are coming on the earth: for the 'Powers of Heaven' (the Principalities and Powers of Evil, Eph 6:11-12), shall be shaken. And THEN shall they see the Son of Man coming in a cloud with power and great glory." In the prophecy of Hag 2:6-7, we read: "Thus saith the Lord of hosts; yet once, it is a little while, and I will shake the heavens, and the earth, and the sea, and the dry land; and I will SHAKE ALL NATIONS, and the DESIRE (Christ) OF ALL NATIONS WILL COME." This has never been fulfilled as yet, and the present "Distress of Nations, " the uprising of the masses in "National Revolutions, " the "Tottering Thrones" and other indications that the nations are Being Shaken, is still further proof that we are living in the times just preceding the appearing of the Son of Man, the "DESIRE OF ALL NATIONS", who will bring peace to this troubled earth.

10. NOAH DAYS. The last "sign" that we would mention is the "sign" of the "Noah Days." Luk 17:26-30. As it was in the days of Noah, they did eat, they drank, they married wives, they were given in marriage, they bought, they sold, they planted, they builded, so shall it be in the days of the Son of Man. Where, you say, is the sin in doing these things? They are not only commanded, they are necessary. That is true. The sin was not in "doing" them, but in doing them "UNTIL the Flood came." That is, they did nothing else. They forgot to worship their Maker. So today men and women are so busily engaged in doing the good things of life that they have no time to worship God. They are so busy building homes for themselves on earth that they are neglecting to secure a home in heaven. They are more anxious that their children should make a good match on earth, than that they should be united to the Lord. They are so much concerned about their case in Court, that they have forgotten that they must stand at the judgment Bar of God.